The product in this post was given to me in exchange for my review/opinion by Disney. We love Sofia around my house. I think its a super cute show and luckily my children agree. We were recently sent SOFIA THE FIRST: THE SECRET LIBRARY. My daughter was so excited when it came with such a cute necklace. My son did try to steal it but he got a whole Sofia set for his birthday so I told him he already had a necklace and ring so he had to share. The new movie is great. It has Olaf, it has Merida, and it shows Sofia on some brand new adventures! Plus I just love Aunt Tilly. She is so funny. This new movie has an all star voice cast (Cary Elwes is in it!) and your kids will be sure to love it. Sofia the First: The Secret Library is out on DVD now! You should get a copy.  We love ours and I am not just talking about the kids. There are some fun Activity Sheets you can print out by clicking on the picture below. You can also see the awesome new clips from the movie below that. 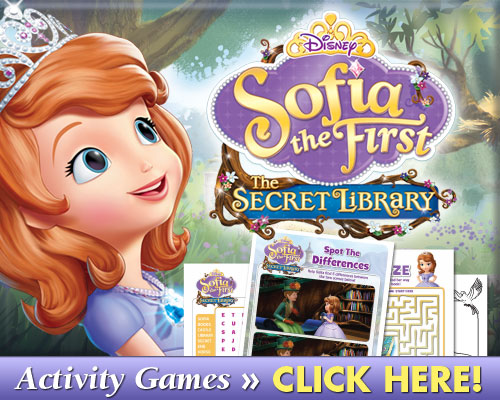 OF MAGICAL BOOKS IN

SOFIA THE FIRST: THE SECRET LIBRARY

Synopsis:                      Sofia‘s Aunt Tilly returns to give her a gift that will unlock a secret world and appoint Sofia storykeeper of magical books without endings in “Sofia the First: The Secret Library.” Follow along as Sofia pursues adventures that will finish the narratives, including rescuing Minimus’ brother from an evil prince and setting out on a mission to stop Miss Nettle from stealing all the beautiful snowdrop flowers from the wintery kingdom of Freezenberg. Merida from Disney•Pixar’s “Brave” and Olaf from Disney’s “Frozen” make special appearances.

The Secret Library: Olaf and the Tale of Miss Nettle (Featuring Olaf from “Frozen”)

One thought on “Sofia the First: The Secret Library Review plus Activity Sheets and Clips”