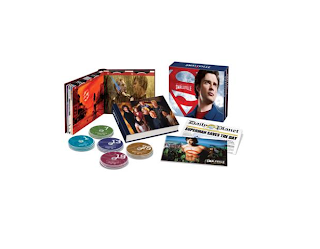 Smallville is over? Nooooooo! That’s the first thing I thought when I realized that Season 10 would be the last one. I love Smallville. I remember when it first came on. My friend Shane and I watched every episode together. It was great with Taco Bell and Mountain Dew as well as some beef jerky. Hey, I was a teenager with a fast metabolism!

It’s really been great though to see all the characters grow into who they are now. It’s like the first moment of seeing Clark and everything in between was just amazingly leading to the last episode of the show watching him in the full Superman suit. It just all fit together. The last episode was my favorite but other than that, I can’t pick a second favorite episode in the 10th Season because they were all so good. I admit that I wish Lex Luther would have came back sooner because I loved him in the show. I was appalled when he ‘died’. Without Lex Luther, there is no Superman in my opinion.

I am sad to see the show go but it had a great run. 10 wonderful seasons. I am super excited as well that Smallville: Season 10 came out on DVD. You can also check out Smallville: The Complete Series which has all 218 episodes with over 28 hours of special features, never before seen features and an Exclusive Daily Planet newspaper written by DC Comics!

I have been hired by Warner Bros WBWord division to raise awareness for ‘Smallville.’