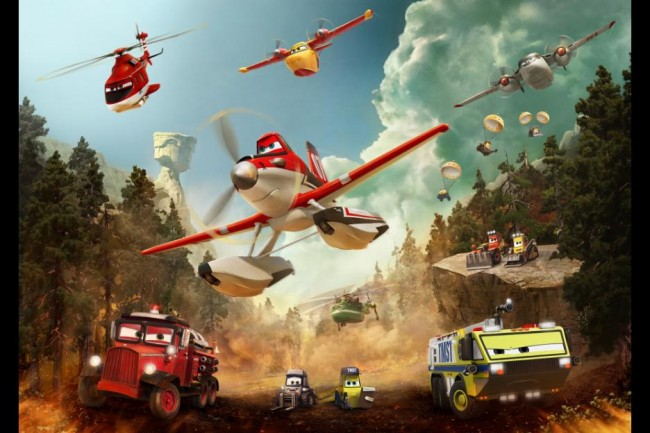 If you haven’t snagged your copy of Planes: Fire and Rescue yet, you need to go get it! It was released on Nov 4th with tons of extra bonus content and deleted scenes. You probably already read my interview with Bobs Gannaway and Ferrell Barron where they talked about the casting of the characters and how they developed certain scenes to be accurate.  That same day at DisneyToon Studios, we also got to meet with the Director of Creative Development Paul Gerard and Co-Writer Jeff Howard.  They were both characters let me tell you.  Take two funny guys and then stick them in a room with a ton of bloggers and you will have a great time.

They showed us a great PowerPoint presentation of how the characters developed that I wish I could show y’all. They did a ton of research into these characters. I know I have said that before but really, A TON OF RESEARCH! They also did research on the areas they showcasing and visited two of the biggest national parks, Yellowstone and Yosemite. The sprinkler system at Yellowstone actually saved the lodge in 1988 kind of like it did in the movie.

They watched videos of actual aerial fightfighters in action. They strapped GoPro cameras on smokejumpers to see how they did it and how they navigate where to land.  They even strapped GoPro cameras to the planes to be able to recreate the type of flying these pilots do.  If you can see the little yellow collars around the sides of some of the smoke jumpers, those are modeled after the high round collar suits that actual smoke jumpers use to protect them.  Some of the tools that these smoke jumpers are happen to be the most popular tools that smokejumpers use. This is how our interview started and we learned about how much work really went into this movie.

Jeff Howard –   Do your research. It has an exclamation point. And it’s a command, so this is a mandatory thing.

Paul Gerard –  John Lassiter, our executive producer, believes in this idea, Truth in Materials, which is, uh, uh, you know. We can find not only character, but story, but the grounding of our movie in our research. Because we have a huge conceit going on, which is that airplanes talk and have eyeballs, so everything else around that should be as grounded in reality as possible.

Jeff Howard –    Right. So we went out and talked to dozens of aerial firefighters and ground crew and smoke jumpers and air traffic controllers, and, uh, visited several national parks to try to get all of the details of the movie right.

Paul Gerard –  And one of our biggest resources was the California Department of Forestry and Fire Protection, which, to their friends, are known as Cal Fire.

Jeff Howard –  Yeah, so, one of the things that was interesting to us when we went out and visited the base was that all of our aircraft had a previous life. The S2, which is their main tanker, which is the one Bob is standing in front of us (this was as they were showing us the PowerPoint), used to a sub-hunting aircraft. The Huey, in the — in the upper right, goes back to Vietnam. The OB10 Bronco in the upper left was a reconnaissance airplane. So, this whole theme of second chances started to sort of gel in our heads, that all of the aircraft are really on their second lives.

We talked to them about how that was supposed to be for Dusty but really it was all the characters. Every one of them had a different life before they were aerial firefighters. It seems to me that that is also how the character Maru was starting to take shape and his catchphrase ‘better than new,” because most all of the tools and planes have to be re-purposed and built anew to fight fires.

Jeff Howard – but we discovered that, you know, many of the things at the air attack base are scratch built. Like, this, you know, they had this Quonset hut that they’d just built themselves. They had a lot of, you know, repurposed equipment and stuff like that. Um, it’s a lot of hand-me-down things. Even their display cases. They had these display cases where they had their t-shirts and coffee mugs and stuff that were just display cases from a video game store that was giving a — like, it used to be a Nintendo thing. So this whole idea of “Better than new” started to creep into our minds, as well.

Then they asked us how many fires did we think that Cal Fire had to fight each year.  Everyone guessed way way too low.  Turns out that there are about 5600 fires a year.

Paul Gerard – Yeah. That’s just California, and this year is actually a banner year for fires. They were on track, last time we talked to them, for like, 6,500 this year. And, so — but the public only hears about the big fires, which actually became a line in the movie, when we were first presenting our pitch to the different directors here.

One of our directors is like, “Well, isn’t that convenient? He arrives at the Air Attack Base, and they happen to be going out on a fire?” And the reality is that’s the way it is.

Jeff Howard –  So, that became a line, and went straight into the movie.   That you know, we almost had Dusty ask the very question that our other director asked when he gets there, and they get an alarm, and Dusty says, “Really, there’s a fire already” and Dipper answers back, “Yeah, you guys only hear about the big ones,” which is literally what they told us. We’re like, that’s a great detail, we gotta put that straight into the story.

There were a ton of things that went straight into the story. They were asking about what exact phrases they would use for certain events like, “Okay, if you’re gonna tell somebody, ‘Drop it a little bit more over there,’ you know, how do you say that in pilot-ese? What would you say?” And he’d say, “Oh, I’d say, ‘Come left one wingspan on your next drop.'”   But then they asked what would they say if they did it perfectly, like a perfect drop, “he just sort of paused. And the other pilots around the table were just sort of looking at their shoes, and he’s like, “There’s no such term for that.” There was always something he could correct and give feedback on, and that’s a little bit reflected in — in Blade’s personality.” Paul Gerard – He’s the only one the FAA has actually given a license to fly aerobatic helicopter flight.

Jeff Howard –And I think after they saw what he does with the helicopter, they said, “Okay, no more licenses.”

Jeff Howard – So, anyway. This is — this is some footage of what he does at air shows with his helicopter, and it’s something that a helicopter isn’t really supposed to do, like loops and barrels and stuff like that. His helicopter is a MMBB0105 that he’s customized heavily. He wouldn’t even tell us the modifications he’s made to it, ’cause it’s sort of a trade secret. He actually tears this helicopter down and rebuilds it at the end of every air show season, just to make sure all of the parts are working correctly. And he spent a long time trying to figure out how to actually aerodynamically do a loop in a helicopter because you’re not supposed to be able to do that.

Jeff Howard –Yeah. Very dangerous. He won’t teach his own son how to do it. Who also flies helicopters. He’s only taught one other guy who is the guy who flies for Red Bull in Europe, that Red Bull said, “You have to teach this guy how to do it, ’cause he’s going of to do the air shows in Europe.” Um, but, it’s this extremely dangerous maneuver. They wouldn’t tell us if there would be third movie coming out but they didnt deny it either. I think that means yes.  You will find out from me though because I have the inside advantage.  Which means that I stalk entertainment websites for news like this.   You can also read what the other ladies on my trip had to say about our interviews by searching for the hashtag #FireandRescue on Facebook and Twitter. This is my last post for my awesome LA trip with Disney.  You can find all of my posts under my entertainment tab or you can search for any of the hashtags from the event #DisneyInHomeEvent, #VeryBadDayEvent, #FireandRescue, #SleepingBeauty, #Maleficent, #StarWarsRebels, and #HalloweenTime in my search bar to the right.