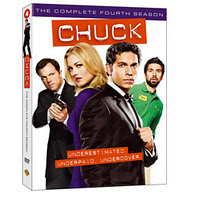 Chuck Season 4 is so amazing. I am so glad to be able to rewatch my favorite episodes. The characters just keep getting more fun. I thought it was so funny about how scared Morgan about how he ‘stole’ Big Mike’s job. He was completely avoiding him. I think its great how they have all these people outside waiting for the video game launch but Morgan is more worried about Big Mike being in the store. He wants to make an ‘honest woman’ out of Morgan’s mom after finding himself out at sea. He finds out she is what really makes him happy. He gives Morgan the ring to hold until he deems him worthy enough.

Which he ultimately drops. Hahaha. I could see that coming. I was laughing at the crowd during the riot because I have been to video game releases and they have sometimes been like that especially the midnight releases since everyone is already so tired of waiting outside forever. Its so much easier to watch it than be in it. I thought it was really decent of Morgan to hand Big Mike his assistant manager vest. It was like an acceptance and a peace offering especially since he lost the ring.

What would you have done if you were in Morgan’s place? How about if you were Big Mike?
Did you cheer when Big Mike saved the day with his Big Tazer?

If you missed this episode, you can watch it and all the others on DVD/Blu-Ray. In season four, the geek gone spy is putting everything on the line, available for pre-order here: http://bit.ly/r3n2er