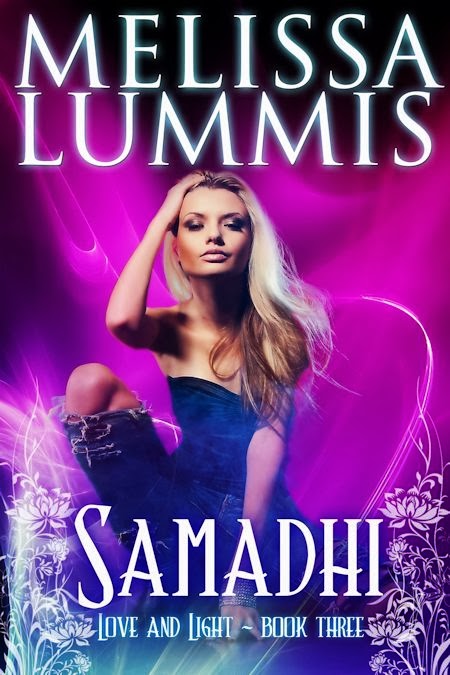 BUY IT AT:
Amazon
Smashwords
Wolf and Loti are learning the hard way that karma will not be denied. In their quest for the truth, they’ve been forced into a blood bond with a powerful witch who isn’t so sure she wants to be tied down. But there’s one thing they can agree on: it’s time to eliminate the ancient vampire who set off this deadly chain of events–Modore.
Using any means necessary–torture, murder, and even death magic–Modore lures the triumvirate into the show down of their lives. And the consequences will far exceed even Modore’s imagination.
In this final installment of the Love and Light Series, the boundaries of love, lust, and even life itself will be tested and the universe as they know it will never be the same.

Melissa Lummis considers herself a truth seeker, a peaceful warrior, a paranormal and fantasy writer, an avid reader, a thru-hiker GAàME ’98, a Penn Stater, a wife, a mother, and a free thinker. She believes the universe conspires to help an adventurer. And if we live our lives as if it is a daring adventure (and it is!), then everything we need will find its way to us.
Her books have been described as new age suspense in a fantasy setting, but they are also straight up, steamy Paranormal Romance. The Love and Light Series is currently available at most ebook retailers and soon to come is the Little Flame Series, a spin off focusing on the character Fiamette from the Love and Light world.
Melissa lives in rural Virginia with her husband, two children, an Alaskan Malamute, and a myriad of forest creatures. The nature of her mind dictates that she write to stay sane. Otherwise, her fertile imagination takes off on tangents of its own accord, creating scenarios and worlds that confuse the space-time continuum.
Namaste, dear friends.
Melissa’s Social Links:
Check out www.melissalummis.com for more about her and her books.
Like Melissa Lummis on FaceBook.
Follow @melissalummis on Twitter.
Tumble with Melissa on tumblr.
Pin with Melissa on Pinterest.
And watch her and co-host Buddy Gott on the Sunday Night Fiction Club on YouTube.
Get unique content, early access to publications, and exclusive giveaways by subscribing to her newsletter.