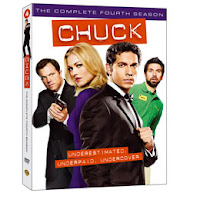 Ever heard the phrase, “No Guts, No Glory”?  I love it. Its like you can’t achieve something awesome without taking a chance.  Did you ever have a situation where you could take the easy path and everything would go on the same or you could take the harder, more dangerous path to reap greater rewards. There is always a chance you will fail in the harder path and end up with nothing but you will get so much more for trying.


Season 4 finale of Chuck was amazing! Chuck was in his most amazing no guts, no glory moment. Sarah has been shot by the “Norseman” device and only has twelve hours left to live. Chuck makes the choice to turn his back on the CIA and go after the antidote for her. He does what needs to be done even  though it could mean losing everything. Thankfully, it turns out good (I was on the edge of my seat!) for Chuck and Sarah.


I guess my opinion might be different from others since I watched the show straight through. I never get a chance to watch shows when they come and always have to wait until they come out on DVD. I have been told for years how great a show Chuck is but I resisted until I finished some of my other shows I love. I watched all four seasons within a couple of months and ended up going to a friends house to watch this most recent season, Season 4, because I didn’t want to wait to find out what happened!


Because of watching the way I did, I really got to see how the characters have evolved without having to wait a season in between each show. I love how Chuck’s character has developed over the length of the show. He has went from a hesitant man with no self-esteem to an amazing spy who risks it all to save the woman he loves. He is no longer just a ‘geek’, he is a man who does what has to be done and I think that is super sexy!


So if you love the show as much as me, you will love this! Season 4 is now on DVD-BluRay. In season four, the geek gone spy is putting everything on the line, available for pre-order here: http://bit.ly/r3n2er.