At the end of the longest weekend ever, my son had his annual Christmas musical at church with his Scout friends. It was fun and cute. I love Christmas musicals and Christmas plays. My son actually had another Christmas play/choir performance on Friday night as well. So like I said, the longest weekend ever. I enjoy the fact that the kids can have fun as well as learning what the Christmas season is all about. Its nice to be able to dress up, chat with other parents, and watch what our kids have learned even if its the same play/musical every year pretty much. I have to admit, I was looking pretty nice myself and I love having a reason to dress up! We decided to stop by Murphy Express on Sunday to get some gas after the production and pick up some snacks for our long ride home. You can also see our Google + Story.

I would have taken a picture of the sign but I couldn’t stand back far enough to get it. The Murphy sign is one of the biggest around so we can always tell if we are close to home when we see it. I put my husband out to pump gas. He is good at that. I was checking around to see how decorated they were for the holidays and to see if they had any good promotions! We ended up parking at the 13 pump so I was kinda worried it would be bad luck. Do you believe in stuff like that?

The first two things I noticed was the fact that they had their drinks for 2 for $2.22! So I bought 4. I know I should not have but that what I would pay for just 2 normally so I wanted to stock up. Besides I needed the caffeine for the delicious surprise I was making later on. The second thing I noticed was the fact that they had a ton of great giftcards! Who would have thought that a gas station would have giftcards for other great stores including:

I love how all the signs were so festive at Murphy Express. Even though it is a smaller store, I though everything looked very nice and well placed. I really liked the fact that when I walked in the cashier greeted me and while I was stocking up, she asked me if I needed any help. While I was checking out with my goodies, I told her about the Laffy Taffy icing I was making later on since I wanted to explain why I was buying so many of them when there was so many other choices on the shelves.

I paid and it was super cheap because of all the holiday promotion sales on drinks and snacks. You can check out Murphy USA on their Facebook page. Or you can follow them on Twitter. That way you can keep up with any promotions going on or any news about Murphy USA.

After I passed out all the snacks, we went home so that I could make some Laffy Taffy icing. My sister told me it was the easiest recipe ever so I thought my son and I could make it together.

All you need for this delicious recipe is:

10 pieces of strawberry Laffy Taffy candy (the fun sized ones) or 3 of the large size ones (I chose large)
2 Tbsp. heavy cream  (have a little extra ready just in case)
1 cup butter  (I used Country Crock whipped spread)
2 cups powdered sugar
Step 1:  In a small sauce pan, melt the laffy taffy and the heavy cream together stirring until the mixture is smooth. You will need to keep stirring otherwise it will clump together. Remove from heat while you mix the rest of the ingredients

Step 2: In a large mixing bowl, whip the butter until smooth. Mix in the powdered sugar, a half cup at a time, whipping until fluffy.
Step 3: Add the melted and cooled laffy taffy a spoonful at a time. If it gets too thick, you can add just a tiny bit more of the heavy cream to it and place it on the stove just enough to get it warm. After each spoonful of the laffy taffy, whip it until it is smooth and fluffy again.
Step 4: Spread icing on cupcakes, cake, cookies, etc. and enjoy! I have found that it will cover a normal cake (9×13) with a fluffy layer of icing or will work for 24 cupcakes. You can also make more to make the icing thicker. And don’t do what I did and go upstairs for a bath because your children and husband might get too impatient and start icing the cake before has cooled down. So of course the icing will melt.
Optional Step: Add a few drops of food coloring to the mix to make the color deeper. It should come out the same color as the Laffy Taffy you put in it.  Or you can do what I did and add it to the cake mix. I wanted a dark pink cake and a light pink icing. 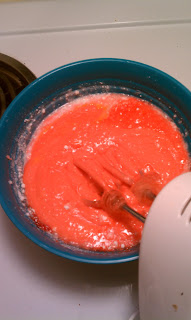 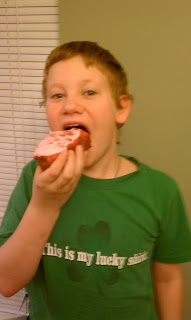 This shop has been compensated as part of a social shopper insights study for Collective Bias. #CBias As always, all opinions are my own.