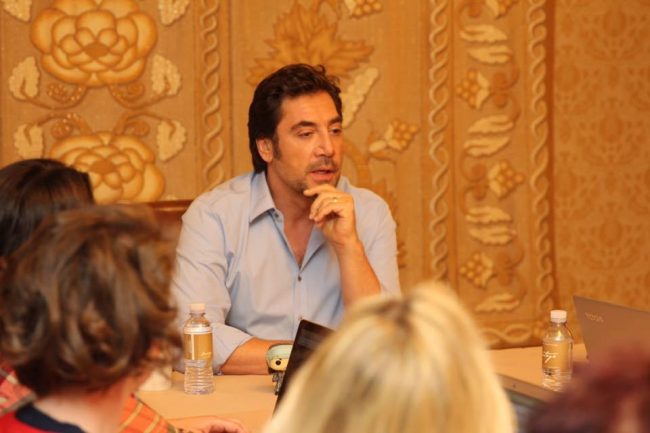 During our #PiratesLifeEvent last week I had the absolute pleasure of interviewing Javier Bardem about his role in PIRATES OF THE CARIBBEAN: DEAD MEN TELL NO TALES. When he entered the room it was like a collective sigh went up. He is just as dreamy in person. We clapped for him and he walked right back out only to reenter for more clapping. He said it was a bit scary being in a room filled with women. He asked us where the dad bloggers were and we said with the children. It was a big laugh. Careful this interview does contain a few expletives.

We jumped right in on questions and asked him about his makeup and was he worried that his roles as villains. He said he hasn’t played a ton of villains, he has just played some well known ones like in No Country for Old Men. He seemed kind of upset that we thought he was a good villain but honestly he is. He plays it well. He said he liked Salazar’s character because he was “like a wounded bull, full of rage and a strong need for revenge. One of the things that attracted me as an actor to play it is because Salazar has a point. I can understand his mentality. Of course, he’s a villain, but we can also find empathy for him.” I always emphathize with the villains so I know how he feels.

We also asked about how easy it was to emote with all his makeup on and he said that was a very good question. He said he worried about that but once he saw that he could do it then he gave all the props to the makeup and special effects people. He said they won the Oscar for special effects in Mad Max “One of the things that the special effects people have done so well in this movie is that they brought magic into the performance without killing it, like the hair, it’s fantastic. I think we have gone maybe more or stronger on it, but they are writing this in the right place, so it’s there but it doesn’t kill the physicality of the performance”

We had to ask him about working with Johnny Depp because they had such amazing chemistry in the film together.

Javier Bardem – “I met him in 1999 in Mexico in Vera Cruz doing a movie called “Before Night Falls” by Julian Schnabel, and it was an inventive movie, a beautiful movie about a gay, Cuban poet that was imprisoned by the Castro regime and then he came to the states and a very important figure in the Cuban culture, also in the gay community, and there were two scenes that he came down to play for us as a favor to Julian, because he knows Julian Schnabel.”
(at this point he gets really kind of flustered and was unsure how to say what he was trying to say in a nice way in English)
“In one, he’s playing this very strong Cuban general, and another one, he plays a drag queen bon-bon. She was a drag queen that was very well known in prison in those days because she would put all the manuscripts inside her rectum. Then, she would leave the prison, take them out, and they were published. This was a real person.
So, he went down to play that and I was in a trailer. I was leaving the trailer and I saw this beautiful blonde hair and a beautiful ass and I said that’s a beautiful ass. They said, it’s Johnny’s, and I said, it’s a beautiful ass. I don’t care! Then I said to him, I don’t know you but you’ve got a great butt. Since then, we’ve been good friends and he was a gentleman then. He was super nice, very caring, very funny, and doesn’t give himself too much importance at all.

I remember that it was so hot, we were sitting on a roof and it was summertime. It was 3 p.m. People were fainting out of the heat, and there was only one umbrella and of course the production went running to watch him with the umbrella and he was like no. The umbrella is not for me. The umbrella is for Javier because that’s the guy who has to keep shooting when I leave. You need to protect him. And that was without making too much noise about it, but I saw that and I think that talks a lot about him”

He said he was the exact same guy he worked with back then. Still making everyone laugh and just generally being a nice guy. I figured though because Johnny Depp seems like a nice guy to work with. We heard from all the people we interviewed that he was funny and kept people cutting up.

It felt like we only had a couple minutes with him but I could have listened to him talk to all day long. I think the other ladies felt the same. He was very magnetic. We asked him how he got involved in the project and he laughed and told us he begged Jerry Bruckheimer for it.

He said when he went to visit his wife Penelope Cruz on the set of the 4th movie in 2010, “I was very jealous because I was seeing all this amazing production taking place: the water, the special effects, the boat, the sword fighting. I wanted to be one of those. So, I said to Jerry, ‘Jerry please, give me a job.’  “I said that because I thought that he was going to say ‘yeah, right,’ but then he called me five years after and I was so surprised and honored because as a movie goer, I love the franchise. So, I knew that production wise and experience wise it was going to be great. Now it was a matter of what’s the story and what can I bring to the character, and when they gave it to me, I thought it was this great thing about one same character played in two ways, 1) he’s alive and it’s all about pride and it’s all about honor and 2) when he’s dead, it’s all about betrayal and pain and revenge. I liked it. It has some powerful moments, the movie itself.”

So he was surprised to get the job but very happy with his character. I think he was aces at playing Salazar. You absolutely have to see it on big screen to see the amazing special effects.

PIRATES OF THE CARIBBEAN: DEAD MEN TELL NO TALES OPENS MAY 26, 2017