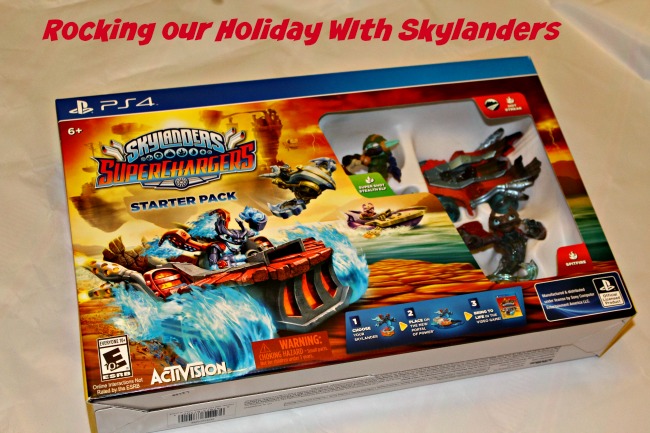 As every parent knows everywhere, Skylanders is one of the hottest toy/game combos out there this holiday season! And just for Christmas, a brand-new Skylander is making his debut! Missle-Tow Dive Clops is a fantastic new character that just came out this month! Able to slow enemies with his candy-coated missiles, he is sure to be a much-sought after character for the game! He loves to celebrate the season by hiding beneath the Academy archways, waiting for unsuspecting Skylanders to wander into the range of his candy-coated missiles! He also has other fantastic and UNIQUE properties that will make him a big hit this year! And at only $12.99 suggested retail, he helps stretch your Christmas budget, too! Look for him at your local Game Stop or EB Games. And check out this cute Official Skylanders: Superchargers Christmas Carol video!

If you loved that you should check out the Official Skylanders SuperChargers: Let’s SuperCharge Santa’s Sleigh! Also be on the lookout for new Eon’s Elite characters and Sky Racing Action Pack- at a suggested retail of under $40, they are sure to make for great stocking stuffers and gifts for the children in your life! The new Eon’s Elite Characters, Slam Bam, Zook, and VooDood are sure to be a hit, as well as the newest set of heroes- Ghost Roaster, Boomer, and Dino-Rang. Look for this pack at Toys”R”Us and other game and toy outlets. And the new Sky Racing Action Pack features Astro Blast, Sun Runner and a special Sky Trophy that unlocks new modes and new tracks! It’s available at all major retailers now!

And if you want fun for the whole family you have to try the Skylanders SuperChargers Starter Pack, now available for consoles and compatible iOS devices (Apple TV, iPhone, iPad and iPod). It’s great for the whole family- everyone can join in on the fun in racing competitions, even if your family is far away! The game can be played online in head-to-head matches for the first time ever! We got the Starter Pack for PS4 and my children have not put it down. They love playing and they even get along while doing it! My 5 year old will tell his older brother what he should do while he is playing and really get into his brother playing the game. And when it is his turn he will talk so much and tell everyone what he is doing and it is just so fun to hear him be so happy. To see what other fabulous characters and to catch up on the latest developments for one of this season’s hottest toy/game combos, check them out on social media: